User features new and recent works of sculpture, drawing, and video which reflect Dodge’s interest in troubling certain polemical, exhausted pairs of relation, i.e. user-used, virtual-material, human-machine, Luddite-technophile, contamination-purity, and so on. Many of the sculptures in User evoke a certain meeting of low-fi and high-tech, as can characterize spacecraft, video/arcade games, and human thought. The sculptures and drawings juxtapose materials and registers to offer up a series of incongruous propositions, many of which are spiked with both humor and pique. These propositions reflect Dodge’s interest in our ability to hold notions in our heads that do not already coincide with our world views, and the ways in which the ability to tolerate the discord (frisson?) of incompatible ideas correlates to the likelihood that an organism will grow, make new thoughts, and learn.

Holding two thoughts long enough to become aware of the fact they don’t agree is uncomfortable. Dodge believes it is just this sort of maintenance or tension that produces ideas about what the shape of approach might soon become (activism, relation, the near and far future). In this way indeterminacy produces fecundity (or is itself fecundity). The plethora of genre, materials, and shapes in User echo, or embody, that abundance.

Dodge has written about the set of small, table-top works that comprise the series “Works of Love,” which appear in User: “One-thing-near-one-other-thing is a sort of minimum legible iteration of the idea of relationship. Of course it’s never just two things in contact. We pretend that that can be, but thing-forces are necessarily more diffuse. Collisions and impacts are legion, unimaginable numbers of causes, and effects which are also then causes; and, by that, nothing in this world has a binary way of being in this world if you think about it. So, too, it is easy to see in these pairings a sort of unwillingness to polarize, provide identifiable opposites; these links can’t resolve, won’t (even eventually) sit still. When the space between things can’t quite be named, continues to hum (it stays lusty), then that is a kind of ecstatic contamination or dissonance or love: the buzz of always-fresh relation.”

Dodge’s new video—the surreal, animated Late Heavy Bombardment—picks up on these themes. The short film explores how “collisions and impacts” can slip toward violence or into the fuzzy, disturbing space between self-defense and preemptive or retaliatory aggression.

Harry Dodge is a Los Angeles-based artist and writer whose interdisciplinary practice is characterized by its explorations of relation, materiality, and the unnamable with a special focus on ecstatic contamination. His work has been exhibited at venues nationally and internationally. Solo exhibitions include Works of Love (JOAN, Los Angeles, 2018; traveled to Tufts University Art Gallery, Medford, 2019); Mysterious Fires (Grand Army Collective, Brooklyn, 2017); The Inner Reality of Ultra-Intelligent Life (Armory Center for the Arts, Pasadena, 2016); The Cybernetic Fold (Wallspace, New York, 2015); and Meaty Beaty Big and Bouncy (Aldrich Contemporary Art Museum, Ridgefield, 2013). Recent group exhibitions include Trigger: Gender as a Tool and a Weapon (New Museum’s 40th anniversary exhibition, New York, 2018); Selections from the Permanent Collection (MOCA, Los Angeles, 2017); and Living Apart Together (Hammer Museum, Los Angeles, 2017). His solo and collaborative works are held in numerous prominent institutions including the Museum of Modern Art, New York; Hammer Museum, Los Angeles; and Museum of Contemporary Art, Los Angeles. In 2017, Dodge was awarded a Guggenheim Foundation Fellowship. Dodge is regular faculty in the School of Art at California Institute of the Arts. His new book, My Meteorite (Or, Without the Random There Can Be No New Thing)—a meditation on matter, artistic practice, and entanglement—debuted in March 2020 from Penguin Press. 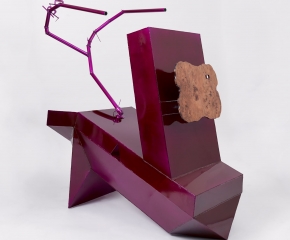 A review of Harry Dodge: User in Artforum, online and print.

A review of Harry Dodge: User in frieze, online and print.

A review of Harry Dodge: User in The New Yorker, online and print.

Read the article in The New Yorker here
Editors' Picks: 15 Things Not to Miss in New York's Art World This Week
Tim Schneider 05/13/2019

A preview of Harry Dodge: User in Artnet News, online.

A preview of Harry Dodge: User in ARTnews, online.

Read the article in ARTnews here
Back To Top