Callicoon Fine Arts is pleased to present BEGIN BEING, a unique installation by Colter Jacobsen for “Positions” at Art Basel Miami Beach 2019.

Jacobsen’s practice is at the intersection of literature and visual art. His affinity for close looking exposes a poetry in repetition and sequencing. BEGIN BEING takes And There Was Light, an autobiography by Jacques Lusseyran, as its point of departure. Lusseyran fell blind after a tragic accident at the age of eight in 1932. He countered conventional expectations of blindness early on, attending a regular public school instead of one for visually-impaired children. When World War II began and Germany invaded France, Lusseyran was cognizant of the gradual normalization of fascist beliefs in Paris. He organized the Volunteers of Liberty, a resistance group comprised of his peers that secretly printed anti-propaganda bulletins, while he was still in high school. He was arrested and relocated to the Buchenwald concentration camp, but managed to survive the war.

Lusseyran details the ways in which his lack of sight provided access to deeper recesses of observation. His experiences in the world as a blind person were reinforced by his remaining physical senses and more intimate sensations emanating from his “inner light.” For Lusseyran, isolation was the most dangerous response to blindness.

Jacobsen has created two unique series of works that stem from his reading of And There Was Light. The vivid colors of his “concrete poem paintings” circumscribe the booth. Jacobsen has explored this series in the past, but the paintings here reach a previously unexplored size. These new paintings begin as a simple grid on wood or canvas. Jacobsen has woven text from And There Was Light into the grid, hidden amid color and shape. Each artwork resembles a piece of graffiti, their words not immediately legible or necessarily visualizing what the words say (as concrete poetry so often does). Jacobsen relies upon our literal reading supplanting the more intimate sensations stirred by the work.

Nestled within these paintings are a series of blind contour drawings, some of which are drawn on the pages of Jacobsen’s own copy of And There Was Light. Jacobsen frequently engages this method of drawing, illustrating what is in front of him without looking at his progress on the page. This new series was produced on public transportation in San Francisco, and depicts diverse strangers immersed in their smartphones. These bodies are often contorted or squished to fit onto buses and trains during rush hour. Linked by way of their commute, Jacobsen wonders what other ideas or issues could bring these strangers into close proximity, or even encourage them to support one another through action.

With these two series, Jacobsen observes the way in which visual representation may serve us when words do not. As he read Lusseyran's book, Jacobsen heard the familiar echo of contemporary nationalism and racism we see around the globe—such injustice demands we act and respond. But how? And when? Jacobsen begs to consider social action and responsibility when the opportunities for isolation and social alienation are persistent. 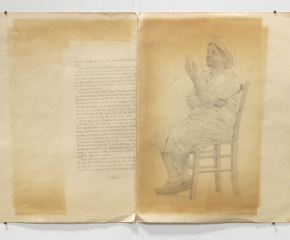 Colter Jacobsen
Back To Top